The 3rd quarter ended on an up note for stocks, with the S&P up 4.69% for the quarter, which puts the S&P up +17.90% for the year. On the other hand bonds, as measured by the Barclays Global Bond Index, are down 2.2% for the year. Many Treasury & municipal bonds, not to mention many bond funds, remain down more than 5-10% thus far in 2013. Foreign stock markets rebounded in the 3rd quarter and are now up 10.8% for the year, as measured by the DJ World Stock Index. Emerging market stocks remain down for the year while gold is down so far 20% for 2013.

The big surprise of the 3rd quarter came from the Federal Reserve. The FED did not begin reducing its asset purchases at the September 18th FOMC meeting, which surprised most market participants — including us. As there was little discussion at this FOMC meeting about the potential for a government shutdown, this suggests the decision not to begin the much feared "tapering" was due to other considerations.

Whether this non-decision was due to tightening of financial conditions since Bernanke’s May 22nd discussion of tapering, the severe damage done to the emerging markets post-May 22nd, the pending change in the FED chairmanship or the continued low readings of inflation (core PCE +1.2% YOY), the FED now has a communication problem. The FED itself acknowledged as much in its minutes noting that "many outside observers (are) expecting a decision to reduce purchases at this (September 18th) meeting."

President Obama provided the markets with good news last week, which reduces uncertainty and provides continuity at the FED, when he nominated Janet Yellen as the new FED chairperson. In accepting the nomination Yellen made clear the FED is not ready to begin tightening yet. As Ben Bernanke is still in the driver’s seat until the end of January when Yellen takes over, it looks to us like the FED is on hold until well into 2014. 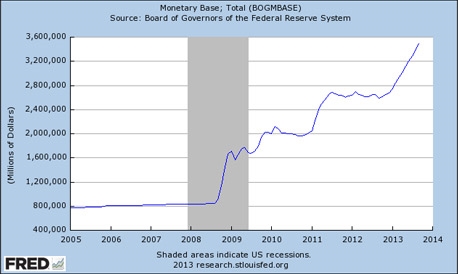 The FED’s continued expansion of its balance sheet remains supportive of stocks and risk globally. Once the fiasco in Washington is over stocks should be begin their seasonal year-end rally.

This unprecedented rate of growth in the monetary base is very positive for stocks!

Stocks are historically cheap. The S&P is trading at only 14 times current estimates for 2014 earnings & less than 13 times 2015 earnings. The S&P’s historic P/E average is 15 times earnings.

For the first time since the Great Recession, the world’s major economies are all growing together. Recent economic data confirm Europe emerging from its 2-year old recession and China’s economic data suggest a bottoming in economic activity. Foreign equity market valuations are even less demanding than our own, though they have higher risk and volatility. China, for instance, trades at a forward P/E of just 9.0.

Here is a chart of China’s electricity output — very hard data to fudge! 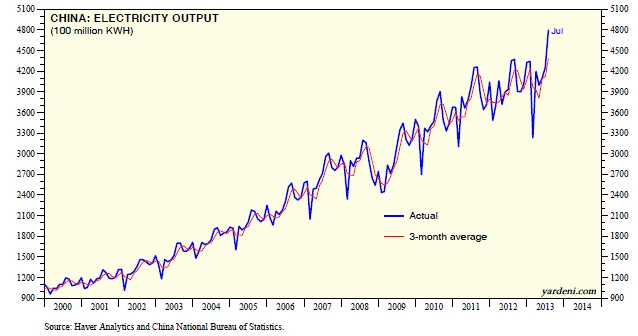 There are really no alternatives to equities. Pension funds are underperforming their "benchmark" rates of return. Most pension funds need rates of return of 7-8% annually. Other than real estate there is only one other asset class that can possibly provide that type of return — stocks.

There are positive structural improvements to the U.S. economy as well. We continue to see productivity gains as manufacturing and technology converge. Household balance sheets have strengthened significantly and are back to 2003 levels. Our trade deficit is now below 3% of GDP, from over 6%. Our demographics are improving, household formation is growing again & we are likely to get immigration reform. Our energy revolution is just beginning & we are projected to be energy independent by 2020. If all this sounds "bullish" it should! These fundamental structural improvements should help the stock market continue to move forward.

Of course, none of this means we don’t have problems, but the world is always a dangerous and unpredictable place, and why bull markets must climb a "wall of worry". But from where we sit the next year looks as bright for equity investors as any in the last 5 years.

Thank you for your business - as always if you have any questions or comments please contact us.