The investing landscape recently feels more like the Shakespearean "he loves me, he loves me not", for the global markets are under the FED’s thumb these days. The Fed is the topic of this quarter’s Investor Letter.

On May 22nd FED Chief Ben Bernanke, in response to a question, told Congress the FED could begin reversing its easy money policy as early as this fall. Prior to this testimony the markets had been under the impression that the FED would continue its QE well into 2014. For those of you who do not follow this sort of thing the FED has committed to buying $85billion a month of assets, mainly U.S. Treasuries and mortgage paper. This is called Quantitative Easing (or QE). The impact of this policy has been debatable, but many market participants believe it is responsible for the recent historical low in interest rates and higher stock prices.

Bernanke’s surprise announcement led to a vicious global selloff in bonds, which then led to a major correction in interest rate sensitive sectors of the global stock markets (especially "safe & conservative" sectors, like utilities (-15%+) and REIT’s (-15%+)) and then finally to the broader markets themselves (the S&P declined 7.5%, peak to trough). Gold & commodities plunged as well, with gold trading below $1200/oz at one point. Emerging market stocks and bonds sold off even harder than here in the U.S.

No asset class anywhere in the world was safe from Ben Bernanke & his FED. Then it got worse.

At the FED’s June 19th meeting, where they released their latest quarterly forecast, the FED told us they are expecting a further acceleration in the economy, which would in turn lead them to move even more quickly toward exiting QE. So instead of backsliding & soothing the markets the FED caused a further selloff. At the meeting (and Bernanke’s press conference post meeting) it was made clear that if the FED’s economic forecasts are "substantially" correct then QE would wind down by mid-2014 and the FED would start raising interest rates in mid-2015. At this point the damage was done (he loves me not!). 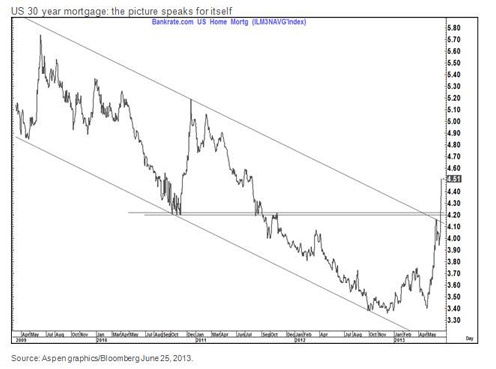 On May 2nd the yield on the US10 year Treasury was 1.62%. On July 5th it went to 2.75%, a 60% increase in interest rates in the space of 2 months. What this meant was investors holding ANY bonds, whether US Treasuries or munis or high yield or mortgages got crushed (prices of bonds go down when interest rates go up). To illustrate the violence of the move, a chart of the 30yr mortgage rate.

But wait - he loves me again!

On July 10th, at the end of a speech Bernanke was giving that evening, he gave us a classic Columbo "Oh, and one last thing" moment when he said "the overall message is accommodation and a highly accommodative policy is needed for the foreseeable future".

This was interpreted by the financial markets as the FED finally backsliding. Stocks promptly rallied globally along with bond prices. And the S&P stock index moved right back to the all-time highs once more.

We have seen bond prices rally for 30+ years as interest rates have declined. FED policy since 2008 has helped push interest rates to historic lows. A reversal of those policies would logically suggest rates are done going down and the great bull market in bonds is over. Many investors think the FED is also responsible for the U.S. stock market reaching all-time highs. So there are a few questions the market is trying to answer as we approach this reversal of FED policy.

How much has the FED distorted the markets normal pricing mechanism for bonds and stocks? No one really knows, and this creates uncertainty, which the markets do not like. This in turn leads to volatility every time Bernanke opens his mouth. Harborview Capital believes the FED has distorted bond and stock prices but we do not think the FED is wholly responsible for the U.S. stock markets new highs. The general thinking on rates is the FED has caused the 10yr yield to decline 75-100bps beyond what we would otherwise have seen.

Will the FED actually be able to begin tapering (ie slowly reducing QE) or will the markets riot and force the FED to continue QE? The FED has made it clear that they will begin tapering in September (October latest) and that the bar for not doing so is very high. The July payroll number (August 2nd) will confirm this timing for the FED. To date the markets have discounted this, as witnessed by the huge selloff in the bond markets. That said, interest rates can easily go up to 3%-3.25% on the 10yr note later this year.

Once the FED starts tapering will they be able to wind down asset purchases completely? This is the big question the markets are wrestling with. The FED has laid out its plan, and emphasized that the execution of the plan is data dependent. If the economy grows as forecast then the FED has committed to winding QE down by mid-2014. If the FED fails to do so then they have a serious credibility problem. Inflation is historically low using the FED’s favorite measure "core" PCE (+1.1% YOY). This would suggest it is very possible, along with the normal ebbs and flows of the economic cycle, the FED will not be able to completely wind down QE & raise rates before it is forced to stop and begin easing again.

One other question regards Ben Bernanke himself. His term is up January 31, 2014, and a replacement will be announced by President Obama sometime this fall. We think Bernanke wanted to lay out the "exit" strategy prior to his leaving, so he would not leave his predecessor holding the bag, so to speak. Bernanke is quickly becoming lame duck FED chairman, and as such it’s important for the markets to know who the next FED chairperson will be and what policy’s that person is likely to espouse. We think the next Fed Chair will be Janet Yellen, a well-known "easy money" member of the FED, who will give Obama the chance to make a historic nomination & help keep the markets calm into the 2014 mid-term elections.

These are very important considerations for your investments. The FED has the ability to wreak havoc on your portfolio and the potential for this HarborView Capital takes very seriously. This is why we spend so much time and effort analyzing the FED and other macro factors.

Bottom line: The big news for the 2nd quarter of 2013 is the FED announcing it will attempt to move from easing to tightening of monetary policy and trying to communicate that path without unduly upsetting the markets. This leads HarborView Capital to some practical investment conclusions:

All investors are wrestling with their asset allocations right now. How big an allocation to bonds is appropriate now? If we reduce that allocation where do we put that money? Do we keep our normal allocations and anticipate the FED being unable to back away from tapering?

We should have some of these answers as we move into the 2nd half of 2013. For now we remain diligent.

Thank you for your continued trust in HarborView Capital as we work to manage your investments & risk.

As always if you have any questions or comments please contact us. And, of course, enjoy your summer!