Highlights of this quarters Investor Letter:

- Central banks to the rescue (again)!
- The world is over indebted.
- Still goldilocks, for now.
- A surprise Chinese RMB devaluation in 2015?

What a quarter. What an October, with an encore in December, two V shaped recoveries in risk…how soon before we need those policymakers again?

The S&P corrected 10% from September 19th (day of the Alibaba IPO) thru the morning of October 16th to erase its gains for the year. The bottom was put in by an impressive display of jaw boning from the world’s most powerful central banks and governments.

We did learn a couple things in October, which were subsequently reinforced a number of times into year end.

We learned the central banks still have “firepower”. We have always maintained that the market panics until policymakers do, and we found out those policymakers still wield a big stick. But we also learned there is no limit to what policymakers will do or say to support asset prices, even if that means moving further down into the worlds credit structures when making asset purchases.

They are running out of asset classes to buy. In 2009 it started with government bonds & mortgages, now its “The Board of Governors has unanimously advocated, where appropriate, to take further unconventional measures to counteract a lengthy period to lower inflation. Theoretically, this also includes the purchase of government bonds or other assets such as gold, shares, Exchange Traded Funds (ETF) etc.” –Yves Mersch, ECB Executive board member, in a mid-October 2014 speech, posted on the ECB website. 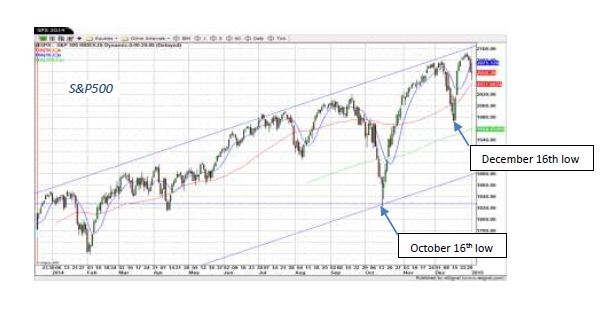 Here’s how it happened in October for the S&P500, after weeks of selling, and a particularly vicious few days: on Thursday, mid-morning, the 16th of October, the St. Louis FED’s Jim Bullard discussed the possibility of QE4. This was enough to put a stop to the selling that day, and the markets ended the day flat. On Friday, the 17th, the BOE’s Haldane suggested that the Bank of England might be on “hold” longer than the markets were pricing in. The markets rallied 1% or so that day. Then on Monday, the 20th, Japan’s GPIF (the world’s largest pension fund) announced a 100% increase in its stock allocation, using proceeds from the sale of Japanese government bonds, which they will sell to Japans central bank (!). On Tuesday, the 21st, the ECB announced they would buy just about anything, not just government paper. Stock market’s don’t find their own bottom these days – bottoms are made thru intervention by policymakers (coordinated, or not).

In last quarter’s investor letter we wrote that the central banks were by degrees less effective in transmitting monetary policy into the real economy thru the banking system. The problem? Lack of aggregate demand, not the supply of liquidity – what is known as a liquidity trap.

Six years into a global “recovery” 90 of the world’s largest economies have annual inflation less than 2%. How is it that in many countries interest rates are negative, and depositors in places like Germany are being charged for the privilege of depositing their money in banks? Does this strike anyone but us as abnormal? The Peter Schiff’s of the world called for massive inflation resulting from the enormous expansion of central bank balance sheets (i.e. money printing). Instead we have deflation as the central banks are not able to effectively transmit their historically aggressive monetary policy (i.e. inflation) thru to the real economy.

Part of the problem is “The Great Deflators”, or zombie companies, kept alive thru the continued efforts of the central banks to counteract deflationary forces. As Ed Yardeni puts it, “These are the ‘walking dead’ business borrowers, who borrowed too much and are hemorrhaging cash. They need to die and should be buried. Instead, easy money keeps them in business, allowing them to continue producing more with their excess and unprofitable capacity. If you look hard enough, you’ll find zombies just about everywhere. It certainly would be easier to spot them if central banks started to tighten their monetary policies. That might explain why central banks aren’t likely to do so. Deflation may be the most telling sign of the zombie problem. By fighting deflation, the central banks are keeping the zombies alive!”.

Think Japanese banks over the last 30 years, much of China, Europe, high yield debt issuers, global mining (now including energy). We should not forget to add that the majority of the world’s governments fit the zombie definition. “Sub-prime” sovereign debt will become part of our investment lexicon in the next global downturn.

As we have been suggesting, this will not end well. Timing is key.

For now, still goldilocks. For 2015 the US is still the best place to invest. Positive momentum in the U.S. economy should allow for GDP growth of ~3%, barring exogenous shocks. Payroll employment rose by 2.73million in the 12mos thru November 2014, the best gains since 2006. Consumer confidence is at 8 year highs & consumers contributed 2.2% to 3rd qtr. GDP’s 5% increase. This point in the election cycle is historically very positive for markets, and the FOMC in 2015 will lean particularly dovish. Earnings are expected to grow 6-8% in 2015. Stocks are valued just a bit above their historical average valuations, inflation & interest rates are low. We should see an 8-10% year for the S&P. Only 13% of our GDP is exports so the impact of a stronger US$ will hurt earnings somewhat but the U.S. is uniquely insular.

The US$ - Driven by diverging monetary policy and growth the US$ index has broken upward thru the trendline of a 40 year “wedge” pattern. The US$ has been a funding currency for many sovereign investors, especially the emerging markets, from Africa to China. If the US$ were to continue to strengthen, as the technical pattern suggests, then we can expect significant problems servicing that debt, with the potential for a crisis.

The FED - While we think the bar is rather high for FED tightening in 2015 currently FED Fund futures are pricing in a 25bps hike by October of 2015. Certainly the FED would love the opportunity to “normalize” rates and monetary policy, if only to get back into a position where they can ease again, but there are many issues domestic (mainly inflation) and global that could easily keep them on hold. As mentioned with a dovish 2015 FOMC it wont take much for them to hold off on any tightening. This would be a negative for the US$ at this point and relieve some pressure on the global financial system and likely give another boost to stocks.

Energy prices - The strong US$ has put pressure on commodities, especially oil, which also has a serious supply/demand imbalance & geo-political factors driving it downward. Brent crude is now down 54% from last year’s peak on June 19th. Saudi Arabia’s oil minister Ali al-Naimi recently said in the Middle East Economic Survey that the "current prices of oil will persist over the long term and that oil prices will never go back to $100". We are just beginning to see the stress in the energy and energy related sectors, much more will come.

The cure for weak commodity prices is weak commodity prices. As uneconomical production gets shut in, and as consumption patterns change (think Suburbans for Prius's), the supply/demand picture is restored to balance. This process will take time, but we would expect to see the lows in oil in the 1st half of 2015. $100 a barrel oil though? Al- Naimi might be right. High yield (~20% energy related) and emerging market debt are not places to be as we begin 2015.

European & Chinese policymaker’s - January 22nd is the ECB’s 1st monetary policy meeting of 2015. The markets are already stressed, with a Greek election on the 24th, the Euro breaking below 1.19 and gold in euro terms finally breaking upward out of a 16-month consolidation pattern. Will Mario Draghi, head of the ECB, respond with “whatever it takes”? Unlike the FED, which rarely fails to disappoint, we have learned the hard way over the years the Europeans normally do. What Europe really needs is reform, structural reform. As we have noted before monetary policy only buys time to get the fiscal house in order, and that is happening much too slowly, if at all.

As for the Chinese they have a significant overcapacity problem, reflected in its PPI, which fell for the 33rd consecutive month in November 2014. CPI rose just 1.4% YOY. The People’s Bank of China (PBOC) cut interest rates November 21st. The PBOC is fighting deflation but in the process keeps the “zombies” alive when they should be allowed to fail. With the Japanese devaluing the yen much pressure is being put on the Chinese renminbi, the South Korean won, and other currencies in the region. In Japan’s quest to create inflation it is effectively exporting deflation to the rest of the world. One surprise of 2015 might be a Chinese RMB devaluation.

Some market moving policymakers comments that caught our eye in the 4th quarter:

“The Board of Governors has unanimously advocated, where appropriate, to take further unconventional measures to counteract a lengthy period to lower inflation. Theoretically, this also includes the purchase of government bonds or other assets such as gold, shares, Exchange Traded Funds (ETF) etc.” –Yves Mersch, ECB Executive board member, in a mid-October speech posted on the ECB website, with global markets in free fall.

“Now is a critical moment for Japan to emerge from deflation. That's why we expanded QQE… [and] today's step shows our unwavering determination to end deflation…[Thus] we have pledged to do whatever it takes to achieve our 2 percent inflation target at the earliest date possible.” – Haruhiko Kuroda, BOJ Governor, October 30, 2014, & echoing Mario Draghi, head of the ECB, in a July 26, 2012 speech

“Based on its current assessment, the Committee judges that it can be patient in beginning to normalize the stance of monetary policy. The Committee sees this guidance as…consistent with its previous statement November 17, 2014.” -FOMC Statement, December 17, 2014, with the S&P down just shy of 5% for the month.

The new Prime Minister of Italy said that he does not think that there shall be any impact upon Italy evolving from the Greek situation. Mr. Renzi said “I feel that I can totally exclude a contagion effect between Greece and Italy, which are profoundly different countries.” -Mr. Matteo Renzi, Italian Prime Minister, December 30, 2014, as Italy sold $3.7bn of 10 yr. notes at 1.89%.

A couple housekeeping items. Many of you know we have been developing quantitative strategies with Bill Greene, of Greene Capital, for a few years now. We rolled out the AAA strategy to clients at the end of 2013, and now have a full year under our belts and ~$10mm+ of assets invested. We are quite pleased with the performance (risk & return) thus far, and with the logic underlying the alogrithms.

Bill and I felt it made sense at this point for Greene Capital and HarborView Capital to formalize their relationship in early 2015. This will include business continuity and succession plans, as Bill is interested in retiring in the next few years. We are pleased to be able to announce this, and look forward to working more closely with Greene Capital to bring the best investment experience possible to all of you. In addition, we will be going “live” with our new website by the end of January.

We wish everyone a happy and prosperous 2015! 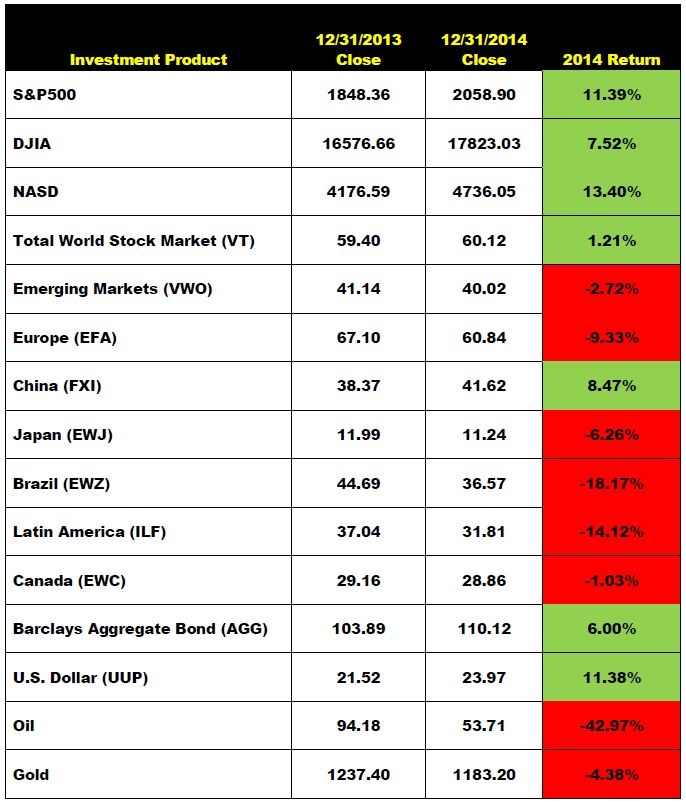