Another year is over. For U.S. equity investors it was a good year, with the S&P 500 up 30% for 2013, while globally, developed equity markets returned close to 14%. Emerging market equities were down for the year. The bond market had its worst year since 1994, with a negative total return for 2013. Gold had its worst year in decades, losing 28%. Commodities were down across the board, both softs (like corn) and hards (like copper).

What can we expect for 2014? We continue to like U.S. stocks (and secondarily European and Japanese stocks). Here in the states GDP growth will continue to pick up and should average around 3% for 2014. Inflation remains low at 1.1% YOY and below the Federal Reserve’s implicit target of 2%. While the FED began reducing its extraordinary accommodation in December and is likely to reduce its asset purchases to zero sometime in 2014, both growth and inflation are "just right", not too fast and not too slow - a goldilocks environment for stocks.

With low interest rates and the continued convergence of technology with manufacturing & services, business spending on capital & labor is the lowest relative to GDP since early 1950s. While not a positive for employment, it does mean productivity will continue to trend higher, and operating margins will remain at or close to record highs.

Earnings estimates have come down over the last six months. The current estimates for 2014 S&P earnings are $121. At a 15 P/E multiple (the markets historical average) that puts the S&P at 1815, where we stand today. For 2015 the current estimate of S&P earnings is $134. At a 15 P/E multiple that puts the S&P at 2010. Clearly we are not overvalued by historical standards. Barring major exogenous shocks or major policy errors we see no reason why the S&P should not return 10%+ in 2014.

It could actually be much more. Since 2009 share buybacks have totaled $1.6 trillion while dividends paid totaled $1.2 trillion. We expect the buybacks & dividends to continue in 2014. If we add to this the potential for a new dynamic to come into play - then 2014 could be a great year. 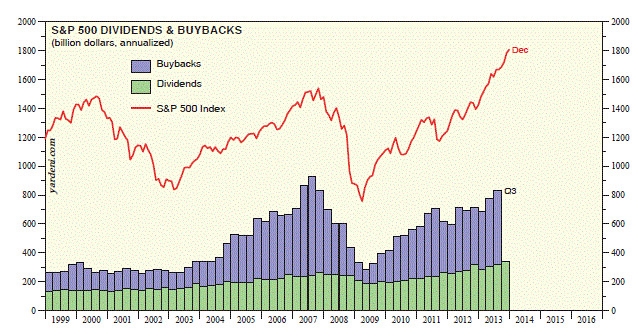 If we combine the continued buybacks & dividends with a continued increase in the "Great Rotation" we have the recipe for a melt up in equity prices. Not our base case, but certainly supportive of the idea we should see a 10% move higher in the S&P for 2014.

What can go wrong? There are always risks to the global economies and markets — geo-political (the Middle East, China & Japan, Sochi), natural disasters, errors in fiscal & monetary policy, various imbalances finally reaching a tipping point (ie Japan). While we can assign probabilities to these risks occurring, it is difficult at best to get the timing correct. We see the greatest threat to the stock markets this year a significant move higher in interest rates that is not due to improved economic conditions. For the U.S 10yr Treasury we will be watching very closely any move over 3.75%. Additionally we will be paying close attention to the Japanese government bond markets for signs that the markets there have finally had enough of the fiscal impropriety.

So stocks should do well, while bonds should be flat to down for 2014. We remain negative on gold and other precious metals, while noting that bearish sentiment and short positioning are at extremes. So while the metals are ripe for a short covering rally it is likely only a bounce in a bear market. Gold could easily trade down to $1050-$1100/oz and silver to $15-$16/oz sometime over the next year before bottoming. 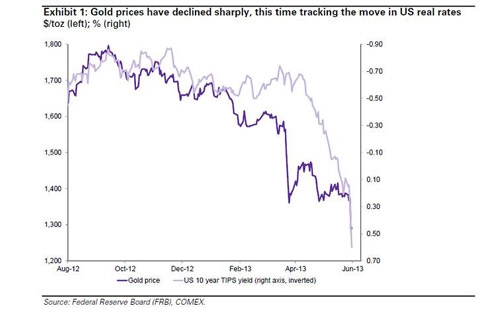 We will be updating Investor Profiles over the next month, so please bear with us as we work to remain compliant with SEC/FINRA regulations.

Our best wishes for a happy and prosperous 2014!