As we end the 1st quarter it’s been a slow start for US investors with the Dow down for the year, and S&P up 0.95%. Bonds up similarly, as measured by the Barclays Aggregate Bond Index. As seen on the chart at the end of our investor letter foreign markets performed the best the first three months of 2015, something we have not seen in many years. This is due to various factors:


There are two major themes in equity markets so far this year both of which began impacting the markets the 2nd half of 2014. One is the strength of the US$ (which impacts exports) and the second weak energy prices. As the above chart suggests our Federal Reserve is taking into consideration the impact of diverging monetary policies when determining the future course of monetary policy (even as the US$ is the purview of the U.S. Treasury Department). A stronger US$ “tightens” monetary conditions domestically, by importing deflation and putting pressure on U.S. company’s overseas competitiveness (i.e. exports) and, most importantly, earnings.

The U.S. $ stands as pillar of strength at the moment while in the rest of the world governments & central banks are devaluing their currencies. There are two major risks to these devaluations. The first is the amount of $ denominated debt owed by non-U.S. borrowers. The Bank of International Settlements (BIS) estimates the total outstanding is now $9trillion. As the $ strengthen those borrowers must pay back their debt with weaker local currency’s. The second risk is China. Thus far China has kept out of the fray as it wants to show the world its ready to take its leadership role, but as we suggested in our January Investor Letter, China may not be able to resist pressure to devalue the RMB to support its slowing economy.

While diverging monetary policy is driving US$ strength (see the above chart of the $ Index over the last few years) the FED is in no hurry to raise rates. As FED Chair Yellen told us a couple weeks ago “Just because we removed the word patient from the statement doesn’t mean we are going to be impatient.”Janet Yellen FOMC press conference 3/17/15.

Besides the US$ the FED is also considering the current soft patch in economic growth due to an unusually harsh winter. Last Friday’s employment report in the US confirmed the recent spate of weak data. The FED (and HarborView Capital) believe this softness will prove transitory and, as Chauncey Gardner said, “in the spring there will be growth”. While post-payroll the market has pushed the FEDs 1st tightening back to the end of 2015 once economic numbers pick up again a June tightening should be back in play. 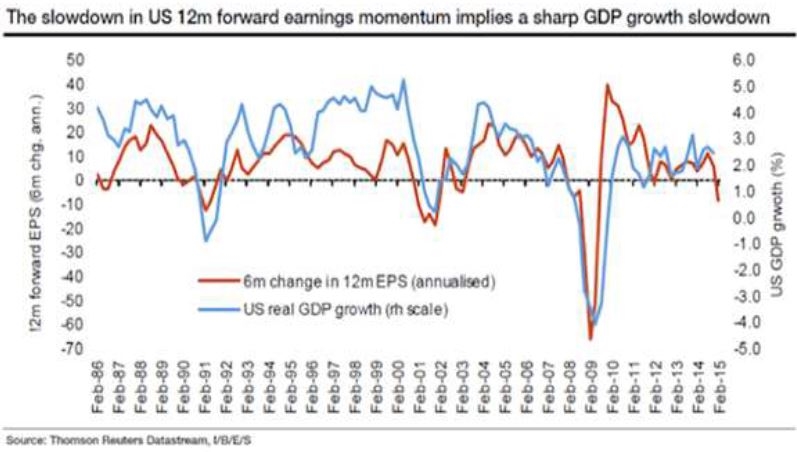 The continued weakness in energy prices are also negatively impacting the outlook for earnings. As we know earnings are the “mother’s milk” of stock prices. Current consensus earnings estimates for 2015 are as follows:

Looks bad for stocks no doubt, but if we take out energy the 1st quarter earnings rate of growth remains positive as do subsequent quarter’s earnings growth. Notice also the rate of decline improves as the year progresses. We would suggest as well that the benefits of lower energy prices have not yet fed thru to earnings, and should do so into year end.

Which leads us to this thought – we at HarborView Capital still sense fear among the investment community. We think market participants are still quite traumatized by the events of 2008. Investors are quick to sell and quick to extrapolate bad news. Rear view mirror investing. Since 2008 unconventional monetary policy responses - which we live with a full seven years on - and their seeming lack of effectiveness - give investors further pause.

While risking to seem Pollyannaish (given our positive view of the markets since March 2009) our bottom line is we still see good returns for stocks in 2015 and into 2016. The four phases of a stock market are: reluctance, digestion, acceptance, and exuberance (as identified by Lazlo Birinyi, of Birinyi Associates, a friend of HarborView Capital). We think before this bull market has run its course investors will be clamoring for risk, and, we daresay, exuberant. We are clearly not there yet.

The bull market is most likely to end, as the majority of bull markets do, with the onset of recession. As mentioned above it is earnings that drive stock prices, more than monetary policy, and more than any one factor. And recessions are lethal to earnings. The average decline in the S&P500 when the economy experiences a recession is 30%+. Identifying a recession has been and will remain our main focus as we move forward. For now we see no to think a recession is imminent. 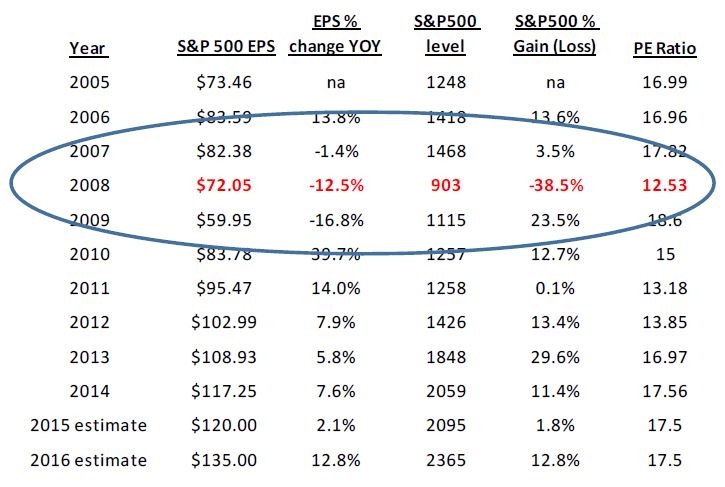 As the majority of our clients are now invested in our quantitative strategy, the AAA strategy, we wanted to give you and update. Thru the end of the 1st quarter of 2015 the AAA strategy is up 4.62% before fees. We are pleased with the performance and volatility and with the uncorrelated return and risk stream vs our benchmark index the S&P500. If you would like to find out more about the AAA strategy please contact us.

We want to leave you with one last chart, this time of domestic oil production and rig counts. The sheer majesty of the chart is something to behold but it also tells us that producers have been quick to cut back on drilling even as production continues to ramp up. Until production peaks as well we should expect pressure on energy prices, and energy company earnings. 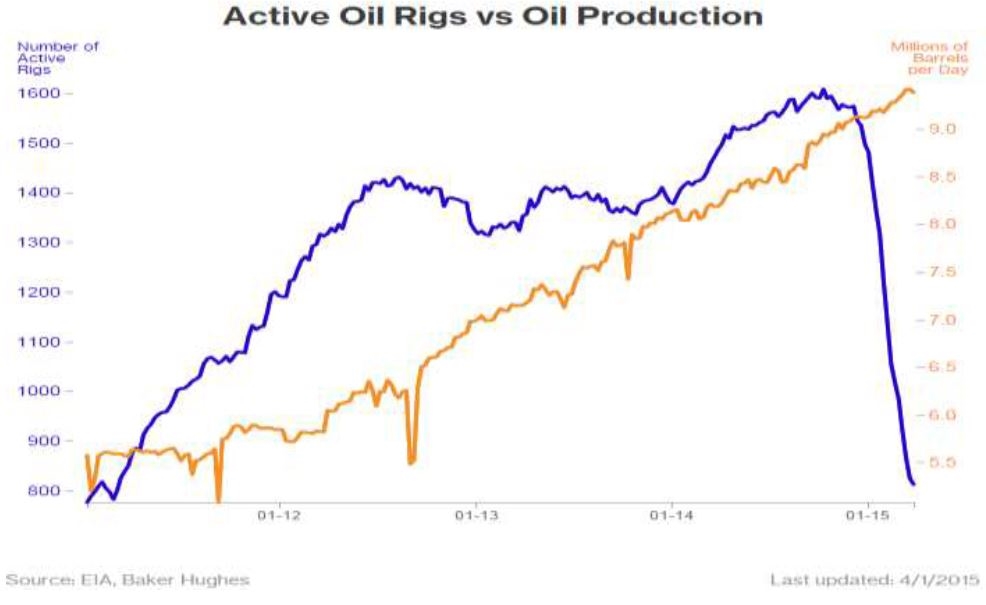 We wish everyone a Happy Spring after this long winter. If you have any questions about your account or the markets please let us know. 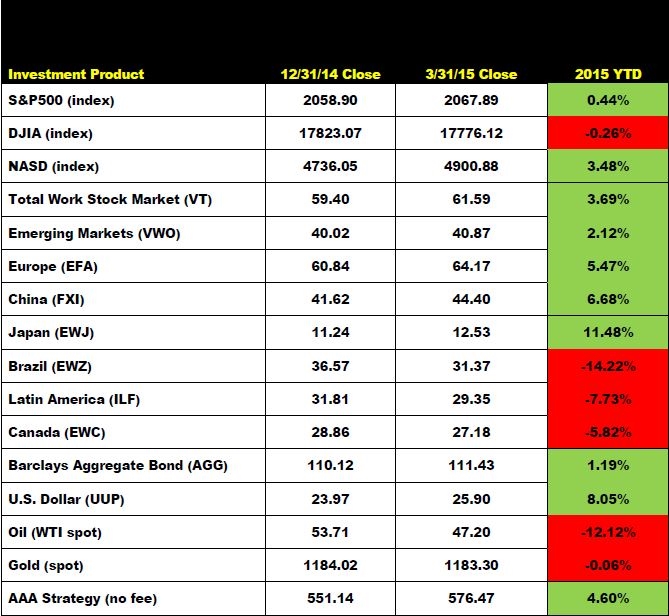